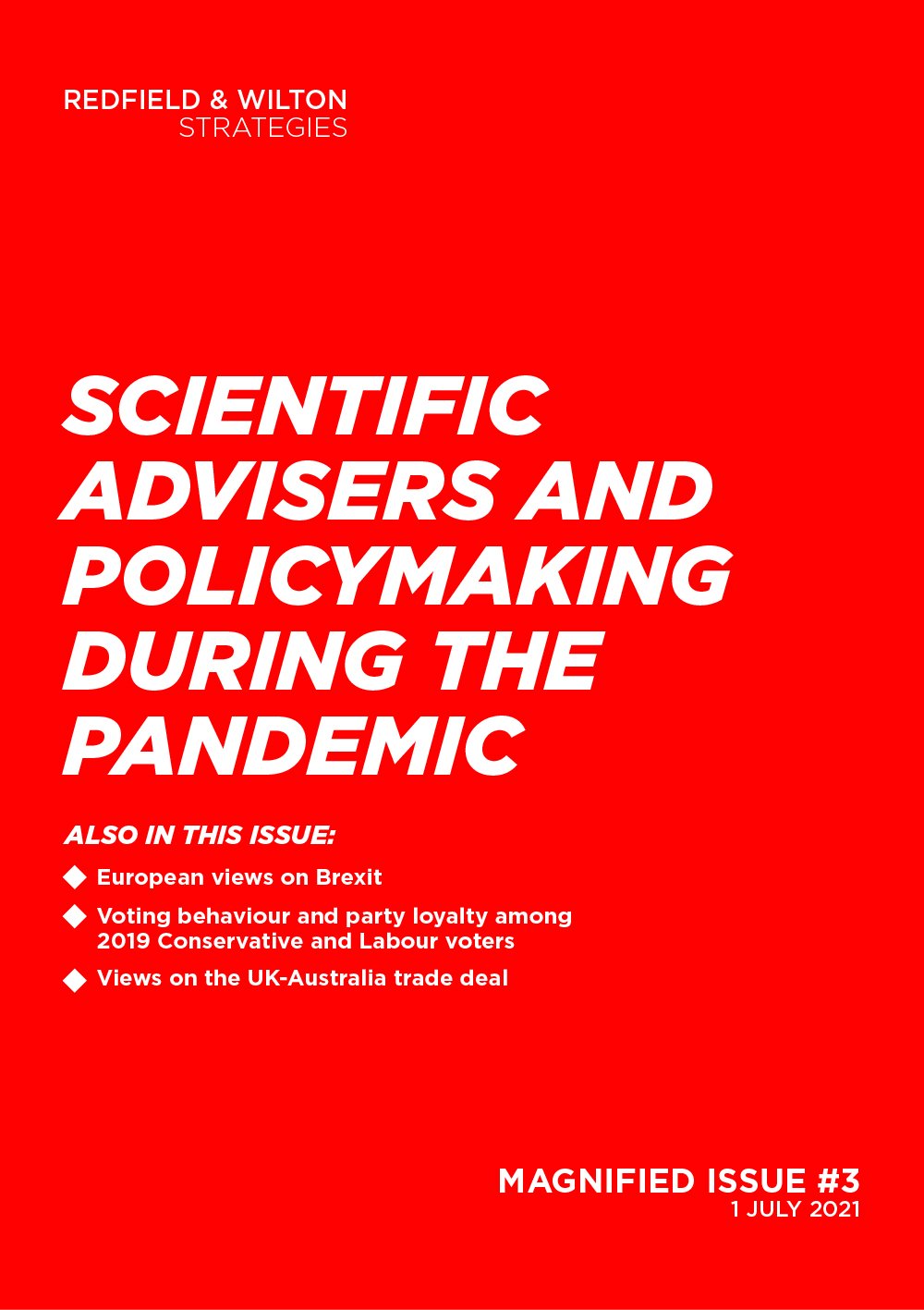 Next Magnified Email sending in:

See Our Back Issues Here

See more of our research

It’s time to take a look at the polls! Each week, Magnified delivers insights and analysis straight to your inbox, allowing you to stay up to date on what the public think about the most important issues of the day. Keep reading for the latest updates on our weekly trackers, as well as our national and international polls. Today, we also take an in-depth look at how the public views the role scientific advisers have played in policymaking throughout the pandemic—and what this means for elected politicians.

This week, our research also covered:

Our latest Voting Intentions poll gives the Conservatives a seven-point lead over Labour, with 41% (-3) of voters saying they would vote for the Conservative Party if an election were to be held now. Yet, Boris Johnson’s net approval rating has gone down to -2%. With a five-point drop week-on-week, these results mark the Prime Minister’s first negative net approval rating since February.

Taking a longer-term view, these results suggest that the Government’s—in particular the Prime Minister’s—handling of the pandemic remains one of the main factors determining approval and disapproval. Johnson’s net approval rating had been negative from September 2020 through to February 2021—when the pace of the coronavirus vaccination rollout in the UK quickened. Our previous research has shown that large majorities of Britons are satisfied with the UK’s vaccination programme, and such high levels of satisfaction are likely to have boosted the Government’s competency ratings and net approval of the Prime Minister. Over time, however, as the public has got used to the success of the UK’s vaccination programme, the latter may have lost its ‘exceptional’ nature and therefore stopped to further improve perceptions of the Prime Minister and his handling of the pandemic. As such, when case numbers started rising again in May, Johnson’s net approval rating began to decline. Aggravated by the prospect of a third wave and the recent scandal surrounding former Health Secretary Matt Hancock and his breaching of social distancing rules, this negative trend has continued, making the Prime Minister’s net approval rating drop below zero for the first time in nearly five months.

Aperture: Other Data You Should Be Aware Of

Great Britain: 40% of 18-to-24-year-olds say their financial situation has worsened during the pandemic, yet a plurality (41%) of respondents belonging to this age group also say that overall, their lives have improved compared to before the pandemic. Read more here.

Great Britain: 45% of Britons think the UK public made the right decision in deciding to leave the EU in 2016—a figure that includes 13% of Britons who say they voted to remain a member of the EU.

Great Britain: 64% of Britons who are aware of the UK-Australia trade deal support it, with 57% thinking signing this agreement would not have been possible without Brexit. Read more here.

Are you a journalist needing a stat for your latest piece? We can be your resource—our polling covers hundreds of issues in multiple countries each week. If you are working on an article on a topical issue, chances are we have already asked the public about it. Get in touch and we’ll share our polling data with you!

The coronavirus pandemic has brought medical experts—be they virologists, epidemiologists or public health scholars—to the forefront of policymaking. The UK Government’s scientific advisers provide a clear illustration of this. While the expertise of such professionals can be an important resource to elected politicians, their direct involvement in policymaking also presents a number of challenges. As the pandemic has repeatedly shown, the Government’s scientific advisers are far from infallible—they, too, make mistakes. Yet, in the eyes of the public, it is largely politicians that are held responsible for these mistakes and their consequences. This faulty attribution of accountability means elected politicians face a dilemma—unable to ascertain the accuracy of the scientific advice they receive, they are nevertheless compelled to stake their political reputation on this very advice.

For elected politicians, these findings mean that bringing in scientific advisers and giving them a prominent role in policymaking is a decision not to be taken lightly, as doing so has two key implications. Firstly, given the public’s trusting attitude towards the Government’s scientific advisers may turn scientific recommendations into political obligations, thereby narrowing down the Government’s room for manoeuvre in policymaking while also blurring lines of accountability. Secondly, and as a consequence, elected politicians are confronted with the problem that they cannot themselves verify the accuracy of the scientific advice they receive, yet are compelled to stake their political reputation on this very advice by having to base their policy decisions on it.

It is clear that no easy solution to this dilemma exists. Yet, increasing transparency—beyond publishing the minutes of SAGE meetings—may be a helpful step. Certainly, increasing transparency regarding possible disagreements—be they among scientists or among Government ministers—may risk undermining the reassuring picture of determined and united action that a Government would usually seek to project during a crisis situation such as a global pandemic. Nevertheless, being more open not only about who advised whom in which way but also about the unknowns involved in making certain policy decisions may be one of the few ways for elected politicians to confront this dilemma they find themselves in. Such increased transparency may not necessarily lead voters to blame them less for their mistakes, but it may help to underscore the point that scientific advisers are not omniscient demi-gods but rather fallible humans, just like politicians. In the end, increasing public awareness of this fact may be the first step towards re-establishing clearer lines of accountability.

Perspective: The RWS Take on the News

The Economist: “Paradise lost: Twilight of the tax haven”

7 Days in the media

Each week we bring you the top stories from the media that have featured our research.

European public back indyref2 within a year, new poll reveals
The National | 23 June 2021

Most Read Case Studies This Week

Two-Thirds of Britons Support UK-Australia Trade Deal, With Over Half Thinking Deal Would Have Been Impossible Without Brexit
22 June 2021 (8 min read)

Our Research on Social Media

On the whole, compared to before the coronavirus pandemic, would Britons say their lives have improved or worsened? (see full tweet)

At this moment, which of the following individuals do you think would be the better Prime Minister for the United Kingdom? (28 June): (see full tweet)

How has the coronavirus pandemic positively disrupted the lives of Britons and their families? (see full tweet)

How would the French, German, Italian, and Spanish publics vote in a referendum to leave the EU? (see full tweet)

Have a question or want to know more about our research? Get in touch!

Redfield & Wilton Strategies is a member of the British Polling Council and abides by its rules.